A couple weeks ago I was sent a link to the image below. The sender wanted to know my thoughts. 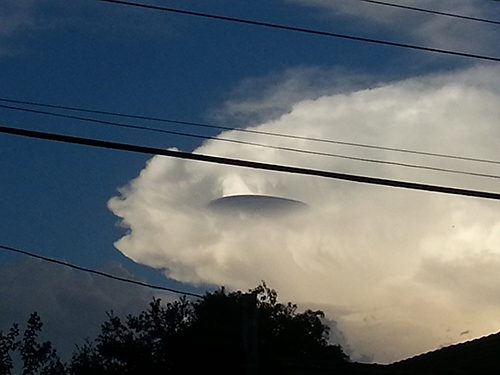 I sent the photo on to Antoine Cousyn, an imaging analyst who devotes considerable to to analyzing alleged UFO photographs. He is part of what I believe is a company (IPACO) which develops software for image analysis. Antoine replied back and told me that, while the image did not appear in any way tampered with or hoaxed, he speculated the following:

From a meteorologic POV, lenticular clouds can have a large range of shapes/colors/position within other clouds and comparatively to the sun position. As far as I know and in some rare cases, they can indeed be associated with a cumulo-nimbus or cumulus congestus cloud. The opinion of a professional weather forecaster could be interesting though.

It turns out that Atoine’s suspicion was correct. Other photos of the same (non) object have since surfaced, from different angles and slightly different times of day, showing that what we have is an unusual lenticular cloud formation, embedded within other clouds.

Here is a link to the Google group discussion of the other evidence. (I’m not sure if you have to have a Gmail or Google account to view it). It has some amazing pictures of similar lenticular clouds, along with the new shots of the alleged UFO. Here is a screenshot. You can click on the link to go to the same Google group discussion and download the individual photos if you like.

History of the Extraterrestrial Life Debate