Hat tip to Jack Brewer and the APR (Aerospace Projects Review) blog for this link (with specs and diagrams) of U.S. bomber projects that, well, look pretty triangular to me.

The APR blog has of course also chimed in on the recent triangle craft sighting in Wichita, KS. APR comments: “The aircraft looks like nothing so much as the Boeing Model 988-122, one of a series of stealthy and semi-stealthy highly maneuverable multi-role aircraft designed around 1996.” 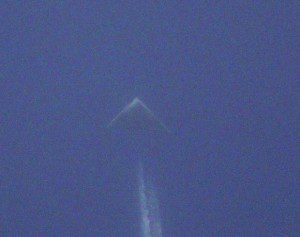 Again, I’m not claiming that all triangular sightings are explained by such projects – only that it’s absurd to claim there’s no possible earthly explanation for such a thing. We not only have triangular jet craft, but also dirigibles.

History of the Extraterrestrial Life Debate

Music on the Moon from Aliens?