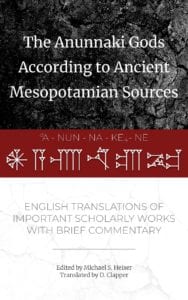 Many readers will have heard of the Anunnaki — hopefully listening to me debunk nonsense about them and not from Ancient Aliens. One of the problems with getting quality information about the Anunnaki is that the best material was published decades ago in German and in scholarly journals that are not freely available online.

I’ve just edited a new book available in print and Kindle that consists of English translations of the four major studies on the Anunnaki from the cuneiform sources. Here are the links:

I had attempted this some years back and posted the file online. But since that time I came across a new article and procured the services of a native German speaker whose English is excellent (hat tip to Doro!). The result is a complete set of English translations from a skilled translator. If you’re interested in what the Sumerians, Akkadians, and Babylonians actually believed (and said) about the Anunnaki, this will be your go-to resource. The translations are accompanied by a summary commentary on the Anunnaki that I wrote for the volume. Thanks to my daughter Molly for the cover!

Off to the Annual Scholarly Conferences!