Things the Prophecy Profiteers Don’t Tell You: Just What is the Promised Land?

Readers may recall my series way back when on “Why an obsession with eschatology is a waste of time.”1 In that lengthy series, I noted (somewhere) that one of the major issues separating any “literalist” millennial position is that Israel still needs to inherit the Promised Land. Yes, so the argument goes, while it’s true that the Church has inherited the Abrahamic covenant in Galatians 3 (see esp. vv. 26-29), that chapter doesn’t mention the land part of the promise. And so we must still expect that the land element still needs fulfillment. 2 This interpretive logic chain is of course disputed by amillennialists. One reason this is so is illustrated below (the land element was already fulfilled and Israel lost its national claim in the exile – which itself has some coherence problems, but I digress).

Tied up in all of this is an issue that I’ve honestly never seen a popular “prophecy teacher” address: the fact that Scripture itself does not give a unified picture of just what is meant by the land promised to Israel and what it geographically entails. There are actually three descriptions given in the Old Testament for that, and they don’t precisely overlap. And then there is the issue of the tribal allotments. They also have some imprecisions in regard to allotted land that doesn’t seem to nicely fit within overall descriptions of the land promised to Israel and (the reverse) unallotted land that lies within those descriptions. (See the first image below).

There’s an excellent article on this subject: Zecharia Kallai, “The Patriarchal Boundaries, Canaan, and the Land of Israel: Patterns and Applications in Biblical Historiography,” Israel Exploration Journal 47, 1/2 (1997):69-82. Unfortunately, I can’t post it due to copyright restrictions. I can only excerpt it. Here’s how it begins (pp. 69-70):

Among the issues pertaining to the Promised Land, perhaps the most perplexing is that of the patriarchal boundaries, set forth in the covenant of Abram (Gen. 15:18b). The promise of the land occupies a central place in the ideology of ancient Israel due to the notion that the acquisition of, and right to possess, a country are due to divine intervention.

The major problem is the intimate relationship of these boundaries to those of the Promised Land, notwithstanding an indubitable territorial disparity between them. A clear territorial distinction must be drawn between three concepts: 1) the patriarchal boundaries; 2) the land of Canaan; and 3) the land of Israel (Fig. 1). Of these three, Canaan is the Promised Land, while the land of Israel, despite its partial territorial divergence, is the realization of this promise. The patriarchal boundaries, however, although closely linked with the promise of the land, patently differ from the other two delineations. Defining their respective territorial outlines and ascertaining the associated patterns and formulae which express and intimate these concepts will clarify their several historiographical functions.

Here is “Figure 1” alluded to in this excerpt (click on the map for a larger view): 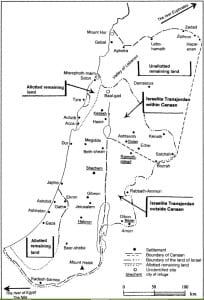 Of the many interesting things about the boundary situation (which is very complicated), two are fairly simple to understand and, therefore, illustrate the problem for all those so sure about the issue and its application to prophecy. First, are the coastal areas of Tyre and Sidon (Phoenicia) are included in what is Israel’s? Second, are the lands of the Philistines included? The map reflects the ambiguity of the first, but includes the second within Israelite territory (Gath, Ashodod, Gaza, Ekron, Ashekelon were the five Philistine cities. Now for two brief observations.

In regard to Tyre and Sidon, if they are NOT to be included (but see Josh 11:8; Josh 19:28-29; Judg 1:31), then it certainly appears that ALL of these lands (not how this image encompasses the divergent descriptions and boundaries illustrated above) were indeed inherited by Israel in OT times – meaning one could argue coherently that the land promise was fulfilled. This was in the days of Solomon. This is the basis for an amillennial claim that the land element was already fulfilled and lost, so Paul didn’t need to mention it in Galatians 3. Note the map and the passages (again, click on the map for a larger view): 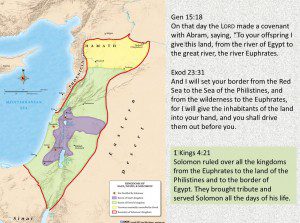 In regard to whether the Philistine cities were to be included, you’d think that would be clear. But then you run into verses like Joshua 11:21-22 –

This verse reads as though “the land of the people of Israel” does not include the Philistine cities. If it did, then the verse appears contradictory and erroneous – how could it say there were no Anakim left in Israelite land when there were? When you really drill down into the land issue (like Kallai in his article), you find these sorts of things. Yeah, it’s boring reading boundary markers in the Bible, but they have obvious importance here.

This is the sort of stuff that real scholars are aware of and struggle with. Though the land talk is fundamental to much of what the popular prophecy pundits say (and their incomes), I won’t be holding my breath that they’ll ever go here and say anything meaningful. If any of them are reading this, it’s likely the first time they’ve ever encountered any of it.

The Function of the Divine Council in Heavenly Worship: Piety, not Mysticism: Part 4

Mike’s Guest Appearance / Interview on the Voice of Olympus