Thoughts on a New Book About Triangular UFOs, Part 1

I’m about a third of the way through the recently released book by David Marler, Triangular UFOs: An Estimate of the Situation

. Despite what I’ll say below, my feeling at this point is that this is an important book that anyone with an interest in UFOs should have. Marler is to be commended for his research.

What’s prompting me to blog about the book at this point is primarily the foreword, though I’ll be critical of a lapse in critical thinking on Marler’s part as well (in Part 2 of my thoughts).

The book’s Foreword is by retired Colonel John B. Alexander.1 Alexander is an expert in non-lethal weapons and a central figure in John Ronson’s book The Men Who Stare At Goats (made into a motion picture starring George Clooney), which dealt at length with the military’s involvement in remote viewing. He’s also known for attempts to use neuro-linguistic programming to create “Jedi warriors” for the military. Lastly, Alexander is the author of UFOs: Myths, Conspiracies, and Realities

Clearly Alexander is qualified to write the foreword to Marler’s book. Dr. Alexander (he has a PhD from Walden University), now in his seventies, is a high profile figure in ufology. That said, he’s also one of the more shadowy, as a career intelligence officer. While I’m predisposed to appreciate Alexander’s often unpopular candor about his own ignorance of whether there’s a genuine conspiracy within the U.S. military to hide the truth about UFOs, it’s fair to say he’s been involved in some conspiracies of his own, such as what has become known in UFO studies as the “Carpenter Affair” – an episode related to the experiences of abduction researcher Leah Haley. After a long commitment to the notion of alien abduction, Haley now believes there are no such things, but rather the military plays an important role.

Regardless of what side Alexander is on at any given point in his career isn’t why his foreword irked me. Rather, it’s the condescension in it, which both presumes ignorance on the part of his readers and reflects flawed logic.

Alexander opines that any conspiracy theory (that doesn’t cater to aliens being the answer to the UFO mystery) “defies facts and logic.” As examples Alexander writes:

Specifically, while the government does develop advanced aircraft in secret, they do not conduct test flights of well-illuminated prototypes near major metropolitan areas. Yet, that is where  many of the large triangular UFOs have been observed. (p. 2)

It doesn’t take too much thinking to realize that the reason the military wouldn’t be testing craft in the way described by Alexander is that the sort of test craft that we know gets tested are jets or high-speed aircraft. You can’t really have the stealth fighter break the sound barrier right above a city. But triangular craft are (without exception?) noted for “floating” at low speeds or hovering. The nature of the craft means there’s no real obstacle (other than secrecy) to deploy such a craft over a heavily-populated area. Alexander (and for that matter, Marler) doesn’t even bring up dirigible technology that could explain a lot of the behavior of the triangular craft (more on that below).

Alexander’s reasoning process also eliminates a priori any psychological warfare benefit to such tests. Within the UFO research community genuine documentary evidence exists that our military did in fact note with all seriousness that UFOs were useful for psychological warfare — making people thing something or some sort of propaganda. The context for that documentation was the Cold War period. If (and of course all our talk about the truth about UFOs most start with that qualifier) there is something to the idea held by some researchers that at least part of the UFO mystery involves terrestrial development by the U. S. military, there might be some psychological benefit to perpetuating a belief in alien visitation. One simple benefit that should be familiar to anyone who grew up in the Cold War era, is that there’s always an enemy out there – and a superior one at that- to justify pouring billions of dollars into any weapons program that might serve to protect us and our interests.

Alexander also suggests that if we had triangular UFO technology of our own we would have deployed it in recent wars in Iraq and Afghanistan, specifically for logistic purposes. Here he draws on the immense size usually reported for triangular UFOs. For the “conspiracist” this, too, isn’t an enigma. It could easily be argued that, if this technology was ours and an item at the highest security level, we wouldn’t roll it out unless we were in a war that had to be won or our national security and sovereignty would be lost. In other words, there’s no compelling reason why, in Iraq and Afghanistan, that logistic business-as-usual would need to be abandoned or improvised. Our country wasn’t at stake, so why use the triangles? Equally as obvious is the psychological warfare angle. Why not use triangular craft at our disposal in these conflicts? Because then the mystery is over — and any “new Cold War” benefit that went with it.

Alexander goes on to add more “proof” to his argument by relating a conversation he had a non-lethal weapons conference with “an Air Force Major General whom I had met years before when we were attending courses at Harvard” (p. 3). This person, Alexander informs us, “had previously been the director of all USAF research and development at Wright-Patterson AFB” (p. 3). Fully knowing the place Wright-Patterson has in UFO lore, Alexander uses these credentials to bias the reader’s take on what he relates next about this conversation. Alexander asked the mystery man if he had any knowledge of large triangular craft in man-made arsenals. The mystery person “indicated we had nothing larger than the C-5, though the Russian Antonov AN-124 is even bigger.”

So let me see if I’m follow this piece of compelling logic. Alexander has a conversation with someone he had met many years earlier whose later career made him well-positioned to know about triangular craft . . . and the fact that this distant acquaintance said “no” means Alexander got the truth? Really?

I’ll go out on a limb here and suggest that if the mystery man did know about triangular craft, and if they were highly secret, then that person would still be bound by oath to keep his mouth shut, especially since distant acquaintances aren’t in the need-to-know.  The same goes for Alexander’s follow-up about defense contractors who couldn’t get funding for such logistics craft. Did he talk to all of them? Could he have missed the one who did get the contract? Better, were any of those contractors in the loop and, if they were, who is Alexander to them? He may be a war hero, but is he in the need-to-know chain of information that is part and parcel of intelligence compartmentalization? Apparently the fact that a high-ranking officer who worked on weird projects had these conversations and didn’t get answers is supposed to mesmerize readers and nudge them toward an ET hypothesis for the triangles.

Frankly, colonel, this asks me to extend too  much faith in what you’re offering as the basis for your conclusions. Not only is your logic not compelling, it isn’t sound. As readers of this blog know, the idea of ET visitation isn’t going to upset and theological, religious, philosophical, or intellectual apple carts for me. I’m not here to debunk. Debunkers (like Phil Klass) were just as irritating to me for the same reasons of incoherence. I just want clear thinking and real proof. It’s not an unreasonable request.

Lastly, Alexander thinks he’s got anyone who disagrees over a barrel with the fact that triangular craft have been reported since the late 1800s, before Kitty Hawk. He also makes a big deal about early sightings in the 1950s. It’s at this point that I have to wonder if he’s deliberately excluding relevant research into human flight technology to bias his case. I speak here of dirigibles. I’ll get into this in Part 2 of my thoughts, but for now let me just say that there are patents on the books as far back as 1864 (that’s right, during the Civil War) for dirigible airship technology. All one needs to do is look in the Patent Office files, which are available online. When you do that, you come across some really interesting things . . . like the dirigible “airship” patent below from 1921. Hmmm. . . . More on what Alexander (and Marler) omit from their discussion next time. 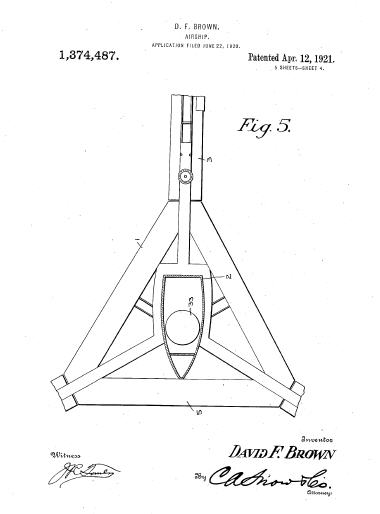 Mark Combs Interviews Mike Heiser about his Novel, The Portent