Yesterday I returned from the ICRS (International Christian Retail Show) in Atlanta, GA. I enjoyed it. It was a worthwhile experience. I was there with members of the team (editors, marketers, publicist) that is helping make my divine council worldview book  (actually, books – see below) a reality. We learned some things that will no doubt be put to good use in the coming months. I had thirteen interviews (radio shows, TV, podcasts) to help begin talk about the books. It will be a long process leading up to release, and then that’s when the real work of marketing the book begins.1

I want to give you all an idea of things to come, as well as give you a peek at the material. This post and those that follow in the next few days will get you up to speed.  In a few days I’ll post the table of contents for each book along with sample chapters (uncorrected proofs). I’ll also be talking to all of you about your role. If you care about this content, I can tell you right now you’ll be a big reason it’s successful (presuming it is). I’ll have specific ideas as to how you can help. Here we go … and give the images time to load (I still don’t know how to work with image sizes).

The original draft of the intended book was The Myth That is True. I still love the title, but everyone agreed (and I see the logic clearly) that having the word “Myth” in the title would deter many people from reading it. The book (as you old-timers will know) is going to be controversial enough without giving someone a superficial reason like the title to avoid it. So we changed the name. The “divine council book” is now called The Unseen Realm: Recovering the Supernatural Worldview of the Bible. Here’s the cover: 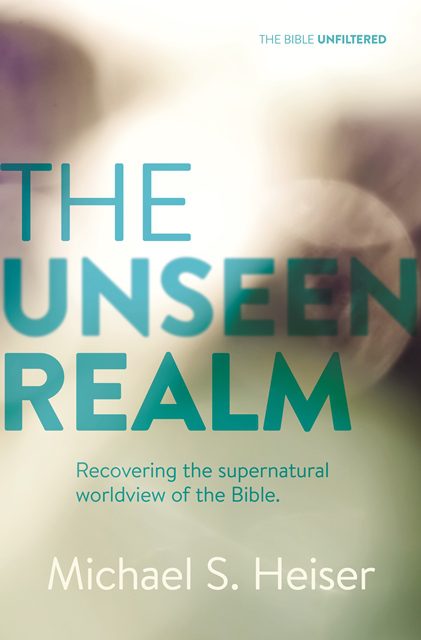 The Unseen Realm is the “revision” I’ve been talking about in earlier posts. It’s done except for line editing. It’s about 110,000 words. The original draft was 150,000. I’ve removed some things from the old draft and also added a good bit of material. But the big improvement is that it’s readable (no more chapters of 7500 words, for example). There are 42 chapters, none of which is longer than 3000 words. Unseen Realm is like the old “myth” draft — it’s an academic work, but not a book for the ivory tower. The intended audience is pastors, seminary students, and anyone academically minded with respect to the Bible and biblical theology.

The second book is not an academic book. It is a much shorter book (about one-third the length of the first) and is aimed at the person in the pew — basically, the Bible reader who has some knowledge of the Bible but hasn’t gone much beyond Bible reading. This second book is our effort to widen the audience for the material. The idea is to take the core ideas of Unseen Realm and distill them in simple language in this book. In industry terms, it’s a trade book.

Book 2 is entitled, Supernatural: What the Bible Teaches about the Unseen World and Why it Matters. Here’s the cover: 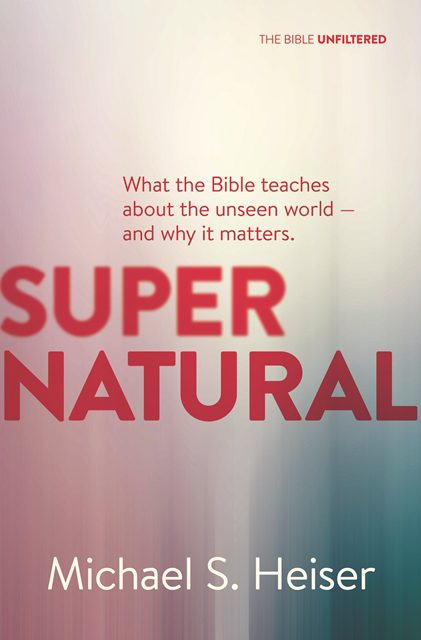 Notice how the covers look alike but are still different. We want people to know they belong together. I’ll be letting readers know in the prefatory material to each book that another companion book exists.

You’ll notice from the covers that both are marked “The Bible Unfiltered.” That’s a series name. Basically whatever else I publish related to this initial material will fall under that series. Also included in the series will be a small group Bible study curriculum based on the content of Supernatural (not Unseen Realm). I won’t be writing that curriculum. The folks marketing the book for book stores will be doing that, though I have final review and approval. That material hasn’t been written yet.

Readers of the original draft will recall that I planned a companion website for further documentation. That’s still the plan. However, because I have taken a few things out of the book (Unseen Realm) and have now made a list of topics to cover in a follow-up volume at some point, I’m actually not sure what I’ll be putting on the website vs. saving for that follow-up book. We’ll see. I’m sure that will evolve.

Lastly, the current goal is that both books will release at the same time — first quarter of 2015 (Feb or March). There are reasons within the publishing world that insiders say this is the optimal time for a new book, so we’re on target for that. However, I will have full, uncorrected (bound) proofs months before that. I’ll be blogging on how you can get copies of the proofs for free in the near future. Like I said, this audience is going to be a big part of marketing the content. You all know that the book will create buzz (controversy and support alike). Despite the professionals helping me, word-of-mouth and persistence “on the ground” is going to be what really wins the day.

The Election of Israel and Its Meaning